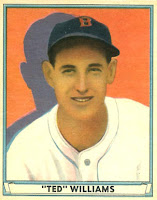 It was 70 years ago today that Ted Williams went 6 for 8 in a double-header on the final day of the regular season to take his batting average to .406. That's 70 years since anyone has topped .400 in the big leagues.

Despite being widely considered the greatest hitter of all time, I've never used Williams as a reference to teach young hitters. He had a considerable hitch in his swing - cocking his hands down and up during each pitch - not seen in many of today's hitters (Jon Jay of the Cardinals comes to mind, and surely there are others). That's the way many of the great ones have swung the bat, but it takes superior strength and quickness to get away with it. A youth player with a hitch like this is often late in getting his barrel to the ball. Or he doesn't get his hands back up enough and swings under the ball. That's why most coaches teach keeping it simple and taking the hands back when loading.

But with Williams, all the key components of a great rotational swing were there - the torquing of the hips, the braced front leg, the slightly upward swing plane. And the results were incredible. Here is a NY Times article about his 1941 season. There are some amazing stats on page 2 - like the fact that he only struck out 27 times; only three of his hits were of the infield variety; and he would have had an even higher average if sacrifice flies were not counted as at-bats like today. And he didn't even win the MVP.
Posted by Brandon Merchant at 2:10 PM