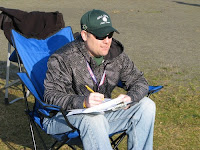 Little League tryouts are this weekend for several youth organizations in our area. We call them "skills evaluations" because there are no cuts - everyone is placed on a team. It just might not be a Major League team.

For someone like me that has gone through the tryout and draft process as a coach for many years, this article by Chris Sullivan of Seattle's KIRO FM is a fun read. His account of the Mill Creek Little League tryouts is pretty similar to the way things are in our league.

I love tryouts. Baseball is back, and as the saying goes, hope springs eternal. But it can be a nervous time for the kids. So here are some thoughts on how to approach tryouts:

Posted by Brandon Merchant at 10:48 AM No comments:

Email ThisBlogThis!Share to TwitterShare to FacebookShare to Pinterest
Labels: Tryouts

What Makes a Nightmare Sports Parent - And What Makes a Great One by Steve Henson, Yahoo! Sports  -  Not just the obvious stuff.

MLB Network Remembers Gary Carter  -  I want my kids to play the game like this guy did.

Posted by Brandon Merchant at 11:21 AM No comments:

Jeremy Lin is the hero of bench warmers everywhere. And rightly so. He got his shot and has made the most of it.

But as Bob Cook points out at his Forbes blog, Your Kid's Not Going Pro, there's more to it than just a coach finally giving him more PT. A lot of natural talent, passion for the game and especially, hard work went into this amazing story.

I hope that part of the message isn't lost on aspiring athletes. Lin didn't really come out of "nowhere" - he persevered past the stereotypes and worked on his game so that he could make the most of his talent and succeed at what he loves doing. He made it happen. The hard work paid off. This is a good read. Check it out.
Posted by Brandon Merchant at 11:09 AM No comments:

Braves' pitcher Tommy Hanson informed the media that he has worked in the offseason to change his pitching delivery in order to take some stress off his shoulder and quicken his motion to the plate. He ended 2011 on the DL, a season in which the Braves collapsed down the stretch and failed to reach the postseason.

Hanson says he is now separating his hands later. This gives his throwing arm less time to come full circle and deliver the pitch, which means it can't get into the awkward cocked position that he demonstrated before. Hanson acknowledged that with his old mechanics he felt like he was throwing entirely with his arm. I'll say - his old delivery was a little painful to watch, so one can understand the stress that his shoulder (and likely elbow) was under. With the new timing of his later hand separation and therefore quicker delivery, his arm won't be ready to throw quite so soon. He'll end up using the energy generated by his hips to pull that arm forward and thus take stress off the arm itself.

Here is a great video analysis of Hanson's mechanics by Dick Mills from several months ago. Mills contrasts Hanson's old delivery with that of Daniel Bard of the Red Sox, and recommends to Hanson that he make an adjustment. I remember seeing Bard pitch in high school for Charlotte Christian - I was struck by how effortlessly the ball seemed to jump out of his hand. That's what whole body mechanics and perfect timing can do for a pitcher.

Pain or injury from improper mechanics may not be felt at at the youth level. But the damage can be done there. Get it fixed before that happens.

Posted by Brandon Merchant at 11:40 AM No comments:

Email ThisBlogThis!Share to TwitterShare to FacebookShare to Pinterest
Labels: Pitching

Time For a Heart To Heart With Your Ballplayer by Dan Clemens - Communicate with your player before diving in. What does he or she actually want out of the season?

Parents: Can You Take Yourself Out of the Equation? by Barb Lazarus - Don't coach from the stands, even if the manager is an "idiot."

Be a Parent First, Coach Second by Ken Krause - For the "idiots" that are also parents.

Posted by Brandon Merchant at 9:58 AM No comments:

The 2012 Little League Regional Round Tables are in Charlotte today. Little League is visiting each of the five US regions to educate and get input from District Administrators (DA's) and Assistant DA's regarding proposed regulation changes for the future. Here are some of the more talked about proposals being discussed from the agenda:
Item 1 - Synopsis: "This regulation would allow leagues to register players who live in another chartered Little League’s boundaries, with written consent from both league presidents and the District Administrator."  This seems to make sense - allow families living in close proximity to another league's fields or with close ties that league to seek approval to make the switch, regardless of boundaries - as long as the system isn't abused, with parents seeking out "better" leagues and league presidents making deals on a regular basis. I guess it depends on how strong of a leader the DA is.
Item 2 - Synopsis: "This would create a new baseball division with a 50-foot pitching distance and 70-foot base paths for 11-13 year olds."  As I have said before, I am all for 50/70 - anything to back up the mound from 46 ft. But I think it should be a 10-12 or 11-12-year-old division. Too many 13-year-olds have
Read more »
Posted by Brandon Merchant at 12:16 PM 1 comment:

Position players don't report to Yankees spring training in Tampa, FL for another two weeks, but as usual, Derek Jeter has been there since mid-January. Jeter could choose to enjoy another few leisurely weeks of his offseason, but he doesn't rest on his natural ability. He trains to get better - stronger, faster and more mechanically sound - fighting off age (38) in the twilight of his career. As he does every year, he trains for spring training.


Jeter is a role model to players of all ages because of how acts on and off the field, both in season and out. His work ethic is what has made him great. If you are a player that truly wants to be great, look to him as an example. And ask yourself - what have you done recently to improve? Baseball season is almost here. No matter what level you play at, there is always someone better than you, and always someone trying to catch up to you. The players with a strong work ethic are the ones that don't get passed by.
Posted by Brandon Merchant at 10:53 AM No comments: