Leadership a Key Ingredient of Success

I've thought from time to time over the years about what made up the most successful teams I've coached. The great teams have of course had talent - especially on the mound and at the plate. Youth baseball is primarily about pitching and hitting. Those teams have also had good, athletic catchers, a solid shortstop and second baseman, and an aggressive center fielder who could fly. These physical talents can be impressive to see.

But there are some "intangibles" that you can't always see that are just as important to a team that wants to go far. One of these is leadership. Without leadership within the team itself, the desire to win is often not fulfilled. Every team wants success. A team with player leadership can make it happen.

As a coach I want to drive my teams to victory. I want to be the captain of the ship and steer the team in the right direction. But I've learned over the years that with a team, leadership must also come from the players themselves. There comes a point in each season when you need to let the players take the wheel and steer the ship. As I look back, the teams I've had without veteran leadership did not achieve their goals. The teams with players that held themselves and their teammates accountable for practicing hard, improving and giving their best effort at all times have been the ones that could accomplish almost anything. The ones that would take the wheel and not veer off course were the ones that stood above the rest.

Many kids don't truly know how to be a leader. Leadership is not just telling your teammates what to do. Yes, it certainly helps to have a vocal leader that is willing to speak up when necessary. But leading by example is perhaps more valuable.

In baseball and other sports, a veteran leader can help his team by showing younger players how to carry themselves on the field. He can show them his effort and his work ethic. He can show them his attitude and sportsmanship. He can show them when to have fun and when to be serious. And he doesn't just lead when things are going well for him personally. He leads his teammates whether or not he is having personal success at the moment.

So I like to look for veteran players each season that have the personality and self-confidence required to be a good leader. I encourage them to speak up to their teammates. But I mainly want them to lead by example.
Posted by Brandon Merchant at 10:22 AM No comments:

I enjoyed this article today by Joe Posnanski on the value of bunting to beat a defensive shift in the big leagues. The video he references of Robinson Cano bunting down the left field line for a double is priceless. Why don't more batters learn that skill and take advantage of the opportunity to get on base for their team when the situation calls for it? Posnanski suggests one reason is that bunting is considered embarrassing for a power hitter. So the hitter's ego prevents him from doing it - as in "I hit home runs. I don't bunt." He likens a power hitter bunting against the shift to former NBA player Rick Barry lofting underhanded "granny style" free throws in order to shoot a higher percentage from the line. It would take some guts for a player to decide to do that now.

Batters must hate the shift. They can scorch a ball through the infield dirt, only to be thrown out by the second baseman from shallow right field. That must be so frustrating. But batters have the power to end the shift. Start laying down bunts occasionally, take the base hit the other team is giving you, and the shift goes away. Frustration gone. Back to regular baseball.

Better yet - become a well-rounded hitter. Let the ball travel and stay inside it so you can hit to all fields. That's why Miguel Cabrera is the best hitter in the game. He doesn't just launch home runs to left field. Look at his spray chart for this season at Comerica Park. Dude hits it everywhere. As a result, he spreads out the defense. He has made it so that he is able to get hits all over the field. He has more square inches of grass (or seats) to work with than most guys do.

Think about why teams put the shift on in the first place. They are taking advantage of a hitter's inability to do more than one thing well. He may be able to turn on a pitch over the inner half of the plate - and he can do that really well - but that's about it. He casts his hands and gets the barrel around the outer half of the ball so often, it's a no-brainer for the pitcher to go away. If the pitcher can hit the outside corner, it's weak contact most of the time. Or they can just put the shift on because they know where the ball is most likely to go. The odds are in the defense's favor even more so than usual because the hitter's usable field is smaller.

That's why a guy like Dan Uggla, for example, is hitting .181. He has 22 home runs, but I don't know that 22 is enough to cover for a .181 average. Uggla is too one dimensional right now. He's too pull-happy. He simply cannot, or will not, stay inside the ball. He's actually a good candidate for a left side shift with no runners on. Why not? According to his spray chart for Turner Field this season, he has hit only 2 ground balls to the second baseman.

The home run is obviously still a valuable stat. And the pull side is a power zone for many hitters. But the stat geeks are spending more time praising on-base percentage. It has been statistically proven to be significantly valuable. So I expect a "shift" in the typical power hitter's approach over the next several years. I think we'll see more bunting against the shift, and more well-rounded hitters. But first, they've got to check their ego and be willing to shoot a few granny shots for the sake of the team.
Posted by Brandon Merchant at 3:52 PM No comments:

I saw a tweet from LLWS Team Canada Manager, Mark Keeping, the other day that said quite simply, "I miss my guys. #summerisntlongenough." I know the feeling. When you form a special bond with a group of players, almost no matter how young, like Coach Keeping surely did, you don't want summer to end.

If you do it long enough, there are special groups for every youth coach. I think it often happens when your own kids are not on the team. You don't have the balancing act of being both a parent and a coach. It's like this second family that you spend a couple of hours with at your home away from home doing only what you love - for me, baseball.

Compared to the "real world," it can seem almost too good to be true. Jake Wade, who has coached in our league since literally before the space race, once said of it, "In our league everybody wins. Everything is good and right as it should be. One can leave the real world and go out there and get refreshed." Jake should know, after almost six decades. When you're coaching a team of 12-year-olds, you aren't concerned with any issues waiting for you in the "real world." It's a kid world, and you just do your best to make it a positive experience for them. Jake has been there. He has his guys.

And when you start advancing along the road to Williamsport, or wherever you are trying to go, it only gets better. You work toward a common goal with your guys and start having success, and it can be an amazing thing. The coaches become more and more a part of the team. Everyone is dreaming big together. Start traveling to tournaments and spend a few days in a hotel with your guys, for better or worse, and you're creating memories that last a lifetime.

Coach Keeping made it all the way. I can't imagine the powerful emotions and memories he has going through his head right now. I bet he misses his guys real bad. We made it to the Southeast Regionals this summer and it was tough to say goodbye when it ended. I know our main coaches, Josh and Wish, are missing their guys.

And I miss my guys too. I'm missing me some Mighty Joe and Babe, Mikey and the Mayor. I'm missing Sam and Fonz and Colin and Martin. The list goes on and on. We connect with so many young lives through competition and striving to reach goals together over the years. The kids and their families affect our own lives in such a positive way. It is refreshing indeed. I want that feeling over and over again. That's why I keep coming back for more. 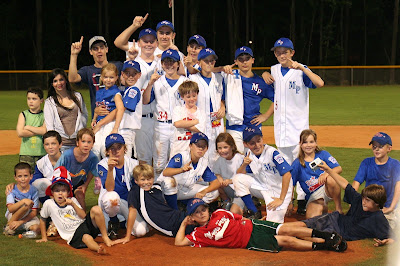 Posted by Brandon Merchant at 10:15 AM 2 comments:

Email ThisBlogThis!Share to TwitterShare to FacebookShare to Pinterest
Labels: Coaching

What We Can't See On TV - Swing Path

When pro ball players hit a baseball a long way on TV it often seems that the batter just threw his barrel at the ball and "caught it good." Take a look at Evan Gattis of the Atlanta Braves. He is big and strong and can crush the ball. He just throws his big ol' bat at the ball and blasts it, right? At least that's what it looks like in full speed:

But hitting a baseball in the big leagues is one of the quickest actions in all of sports. Unless analyzed in super slow motion, we can't really see the details of what happened.

I teach youth players to try to swing like what we can't see on TV - not always an easy task. That's why video analysis is so key. We use it in the cage, but we also need to do it when watching a game at home. The DVR helps - I occasionally like to rewind a great hit and enjoy it frame by frame. But YouTube helps even more. There are countless slow motion videos showing quality hitting and pitching mechanics for young players to try for themselves.

I think one of the main things we can't see on TV, because of both the camera angle and the speed of the live footage, is swing path - the path the bat takes to best get to the ball. Almost any pro ball player does it correctly, but it's often difficult to see this important aspect of the swing.

Read more »
Posted by Brandon Merchant at 1:16 PM No comments:

After a Dream Summer, Back to Basics

Spring was successful. Summer was a dream come true - an NC State Championship and a trip to the Little League Southeast Regional in Warner Robins, GA - albeit as a fill-in pitching coach.

Now it's time for Fall Ball, an instruction league that serves as the beginning of the youth baseball year for many players. It's a time to focus on the very basic mechanics of the game. These were my thoughts last year, and they still are. Meanwhile, back to writing new material.

Posted by Brandon Merchant at 10:10 AM No comments: