Importance of the Batting Stance in Youth Baseball 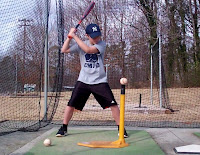 I usually hesitate to change the batting stances of youth players. I figure having a little style at the plate is one of the fun parts of the game. Ball players like to maintain some of their own unique identity. Just ask this guy. And besides - what matters is that everything is in the proper position when the front heel plants. Just ask this guy.

But at some point, an incorrect batting stance can hinder a player's swing, especially a young player. Here are some basic parts of a good batting stance that will help lead to a good swing:

The Feet: I like a wide stance - several inches wider than the shoulders. This helps to eliminate any tendencies to drift forward with the upper body, lunge with the front knee, or step out. The batter can just tap the front foot for timing and stay back. There is no real stride forward. But most importantly, a wide stance gives the knees enough clearance from each other for the back knee to bend 90 degrees. This makes it more possible for the upper body and head to stay back behind the ball at contact on a line with the braced front leg. This positioning allows for a correct, slightly upward swing plane. Young players who
swing with their feet too close together tend to have a flat (to the ground), or even downward swing plane and pop the ball up because they have their upper body more above the ball at contact. True - a player can technically get in the correct position from a narrow stance with a long stride. But doing it right at the right time is much easier and more likely with a wide stance.

The Knees: Knowing that the upper body needs to stay back causes some young hitters to begin to lean back in the stance. They bend the back knee more than the front before it's time. This can often result in two problems: (1) The weight of the upper body can get behind the back leg when they go back further to load - it should be on the inside of that leg so that the hitter's momentum can more easily begin to go forward; and/or (2) The shoulders may tilt backwards with the back shoulder below the front one - meaning the hitter is dipping before he even starts his swing, and he will probably fall under the baseball. I prefer both knees to be equally bent in a typical athletic stance - like you would play defense in basketball or soccer. The hitter can then load the hands back and keep his weight where it should be and his shoulders level, or even tilted forward slightly.

The Fingers: A twisted, or closed grip with the largest knuckles aligned causes the elbows to flare out away from the body. The middle knuckles should almost be lined up (slightly more closed) so that the elbows can hang in an upside down "V" position. Then the back elbow can tuck into the side of the ribs as the hitter pulls to contact and the arms will have the flexibility to extend through contact.


The Hands: It is considered correct for the hands to be at the back shoulder. For young hitters, I like them a little higher, due to a weaker player's tendency to drop his hands more while pulling to the ball. And speaking of pulling - you can't pull the knob of the bat to the ball if your hands are out over the plate when loading. This results in either throwing the hands and bat at the ball with the hands and back elbow away from the body for a topspin grounder, or if the batter does pull the knob of the bat from that position, he will be pulling away from the ball toward 3B and slapping at it with little force. If the batter will rest the bat on his back shoulder with his hands touching his chest, and then raise it straight up a few inches, his hands will be set behind the back ear and he will be able to pull more directly to match the path of the incoming pitch. Rest it, raise it.


The Elbows: As mentioned above, I prefer an upside down "V" position. Hands up, elbows down. The back elbow must tuck into the back side of the ribs as the hitter pulls to the ball. This allows for the lead elbow to guide slightly up to the ball, and it ensures flat hands at contact (not rolling the wrists over too soon). So the old "get your back elbow up" advice can be counter-productive to a young player. Shoving that elbow up also creates tension. Tense muscles are slower. Loose muscles are quicker. The elbows must be relaxed and quick so the hitter can pull the knob of the bat forward to the ball and whip the barrel through the zone.

The Bat: If the hitter will "rest it and raise it" as mentioned above, not only will his hands be in the right place, but his bat will also be set at the correct angle. Many young hitters hold the bat with the barrel hanging too low. Often it wraps behind the head or their back when they load. This means the barrel has a longer path to get back up and around and forward to the ball. The hitter must be "short and quick to the ball." Pointing the bat up more to the sky behind him will help him do just that.

Youth players need to consider something about the quirky stances they see MLB players using on TV - pro ball players not only have "man-strength." They have the strength, quickness and athleticism of someone who has trained at the highest level for years to swing a bat. Kids are much weaker and less quick, and would help themselves by having a basic stance where a good swing can fall in line more easily. They can develop a little more style as they get bigger and stronger years down the road. A cookie-cutter, basic stance might not be very fun and exciting, but the hits that are produced from it should be. Give yourself the best chance to drive the ball. Let your actual hitting, not your hitting stance, be your style.

Posted by Brandon Merchant at 11:01 AM