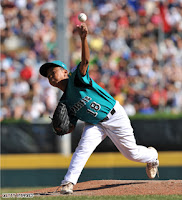 The recently published results of a five-year study on curveballs by the University of North Carolina and Little League Baseball have done nothing to cool the debate about the safety of breaking pitches at the youth level. It may be that the discussion is only heating up, as a result of that study's controversial findings, or lack of findings.

While the UNC study caused Little League to report that overuse, rather than curveballs, was to blame for arm injuries, former coach and current WFAN (NY) radio host Rick Wolff begs to differ. He says you simply cannot ignore decades of doctors' advice against throwing curveballs or sliders at a young age. Here is a podcast of his recent interview with Cincinnati orthopedic surgeon, Dr. Timothy Kremchek, who believes that Little League has political reasons for not banning curves.

Whether "it's politics" or a lack of conclusive information,
I doubt that Little League would blatantly ignore something that was clearly dangerous to its players. That's why they conducted the UNC study in the first place.

Regardless, there's a lot of confusion out there. Just two years ago, the American Sports Medicine Institute (ASMI) concluded that curveballs do not put any more stress on the arm than fastballs. In this NY Times article, ASMI's Dr. Glenn Fleisig said, "I don't think throwing curveballs at any age is a factor that is going to lead to an injury." After the same study, ASMI's Dr. James Andrews told the Times he wasn't so sure about that.

At this point I think you have to either err on the safe side or keep things in moderation. Each parent and coach will have to decide how far to go. I guess the jury is still out. I don't know that an outing of 80% fastballs, 15% changeups and 5% slow curves is going to hurt anybody. But poor mechanics and overuse will. I do know that. I think.
Posted by Brandon Merchant at 1:37 PM