Joey Bats is Where It's At 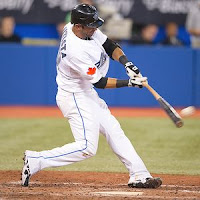 Jose Bautista of the Toronto Blue Jays is the man to watch in 2011. Albert Pujols may be the greatest hitter of the past decade, but Bautista is the best in the game right now. His numbers make that obvious. After two months, he is 1st in home runs (19), on-base percentage, runs and walks. He is 2nd in batting average at .353. Since the 2010 season began "Joey Bats" has hit 73 bombs. This year he is on pace for 65 - an unheard of number in the supposed post-steroid era.

How does he do it? Just watch his swing over and over. Notice the violent hip turn, the firm front leg, and he doesn't swing level to the ground, kids - he's level to the pitch with a high finish, and then some.

Let's hope Bautista doesn't go the way of Barry Bonds, Mark McGwire and now apparently Lance Armstrong. Because this is fun to watch:

Posted by Brandon Merchant at 11:47 AM