Albert Pujols: Hall of Famer On and Off the Field 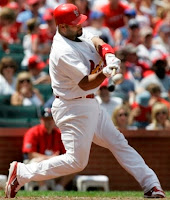 60 Minutes will be running a story on Albert Pujols of the St. Louis Cardinals tonight at 7:00 on CBS. Widely considered to be the best player in the game and a sure-fire Hall of Famer, Pujols has also made a tremendous impact on the lives of thousands of people in need. He is passionate about helping both the poor people of his native Dominican Republic and those, like his own daughter, born with Down Syndrome.

This guy is the real deal. He is a role model both on the field and off the field.
Posted by Brandon Merchant at 2:40 PM