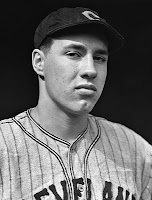 Baseball legend Bob Feller died yesterday at the age of 92. It's almost hard to believe the outspoken, dominant right handed pitcher and war hero was mortal, when you consider his amazing life.

He came from humble beginnings, but rose to stardom quickly. He was signed by the Cleveland Indians at age 16, and struck out 15 batters in his Major League debut at the age of 17. He returned to high school after the season for his senior year. His graduation ceremony was broadcast by NBC on national radio.

Feller would have won almost 400 games if he had not given four years of his career to the US Navy during World War II. He served on the battleship Alabama and saw action in the North Atlantic and the Pacific.

He pitched as recently as last year at age 90 in the Baseball Hall of Fame Classic in Cooperstown.

Feller was one of the hardest throwers ever. But more importantly, he was a great American. He was the "Ace of the Greatest Generation." It's hard to find heroes like him anymore.

Posted by Brandon Merchant at 10:47 AM